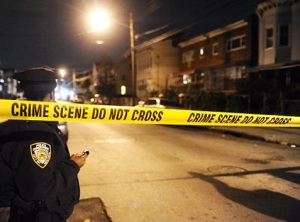 He’s the boy who lived across the street. It’s not like we were best friends or anything. He was a couple years younger than me. While I was contemplating new lip glosses and outfits for middle school, he was racing down the hill on his bike with friends. Sometimes we would play together outside with all of the other kids on our block. Sometimes we ran to the ice cream truck at the same time. We weren’t best friends, but there was still the unspoken love you have for your neighbor growing up in Washington D.C. Of course, I would always smile when I saw that he had grown taller every time I came home. Of course, I would always wish him well. Yet…there’s a crime scene outside my house.

When it was time for college, I wanted to get as far away from D.C. as possible. I packed up my things, and I rarely looked back. As fate would have it, seven years later I yearned to return home. When I did–home didn’t quite look like home.

It seemed that every welcome home greeting from my neighbors included updates on those “gang-banging” teens who came from good homes. They turned their noses up at the boys who just couldn’t get it together. They locked their fences to keep out the boys who smoked and skipped school. I rolled my eyes.

Even after my car had been repeatedly egged, I refused to assume that the “gang-banging” boys had to have done it. Still, I can’t tell if I was much better than the rest. Each time I saw the young boys walking around the neighborhood instead of school halls, I didn’t know what to say. The first time I thought that it wasn’t my place to encourage them to stay out of the streets. The second time I was really going to say something, but I thought that I should wait for the third time because I had just returned home. The third time never came because there’s a crime scene outside my house.

The whispers say that it was a drive-by shooting. The whispers also say that he had it coming, and it will come for the rest of them too. He was doing drugs and skipping school so he was going to get shot sooner or later.

The logic doesn’t add up to me. Is it truly a cause and effect relationship dictating that rambunctious behavior typically associated with American teens leads to possible death? Or is it that the rambunctious behavior of African-American teens leads to death? Furthermore, will the whispering, silence, or delayed action lead to different outcomes?

It’s only been an hour, and I don’t have any answers. From now on, I can say that when I feel an opportunity to act–I will act. I will aim to make my action as effective as possible, but I won’t wait to act. I will commit myself to at least making an effort. I don’t ever want it to be too late again. Right now, there’s a crime scene outside my house.